It is currently The NOVA Open tabletop gaming convention in America and Games Workshop are continuing their crazy announcement pacing by revealing a bunch of new shiny things for me to throw my money at.

I’m just highlighting the things that appeal to me (which is most of it) but you can get the full skinny here.

Not much was announced for pure Age of Sigmar mainly because we have already had the recent announcement of the Beats of Chaos Battletome and new miniatures are on the way. We did get this very interesting teaser video though,

It could be a new campaign supplement, an event or even a AoS boxed game. Anything really! One thing I know for sure is that the Host of Slaanesh are fighting with the Deamons of Khorne and that can only mean one thing. We are getting closer to Slaanesh returning to the Mortal Realms!

Age of Sigmar adjacent is Warhammer Underworlds and the lid has been lifted Nightvault aka Season 2 of the game.

Fully compatible with the cards, boards and Warbands of Shadespire Nightvault is bring a whole bunch of new stuff including 8 new Warbands. For now though we have been given a look at the new Core Set. 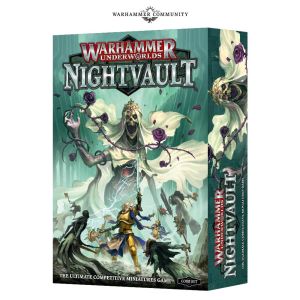 I was *this* close to grabbing a second Shadespire Core Set recently so I could run four player games. Nightvault being compatible with Shadespire has rewarded my patience so I’ll be expanding my Underworlds collection and my player count at the same time!

The miniatures in the Core Set are awesome too!

Naturally we are getting yet another Stormcast Eternals Warband which is to be expected. This troop of Evocators looks bad ass which means they will be seeing plenty of action in my games of Warhammer Underworlds and as part of my Stormcast Eternals army for Age of Sigmar.

Then we have this gaggle of Chainrasps led by a character called the Briar Queen. These guys look amazing. They build on the standard Nighthuant Chainrasp Hordes sculpts turning them into distinct characters which I will of course be adding to my slowly growing Nighthaunt Procession!

The final Underworlds tease was this flying Squig which gives more fuel to the fire of one of the new Warbands being some sort of Grot and beasties lineup. Which also means we are likely to be seeing an updated Grot range for Age of Sigmar too!

Warhammer 40,000 got most of the love with several announcements. Here are the ones that appealed to me!

Speed Freeks was revealed and it looks like it will be crazy chaotic fun. With the miniatures being useable in 40k games and part of a new range of Ork vehicles being a nice added bonus.

These new vehicles have so much detail and charm that I am very tempted to pick up Speed Freeks when it comes out in Orktober (October). Not only that but I’m getting closer to blowing the dust of my Space Ork collection I have had since I was a teenager and getting up to speed with the 40k rules.

The gradual teasing of the new Sisters of Battle range also continued, this time with some head sculpts being shown off,

They look like a mean bunch and I really want to see what the completed range looks like. Games Workshop also doubled down on their commitment to having an open development process for the new Sisters of Battle by announcing an open playtest of the Adepta Sororitas Codex. Which hopefully means that when the finished Codex drops the Sisters of Battle will be a very competitive army that sees a lot of play.

The last 40k-ish thing that was announced was the latest Warhammer Quest,

Callum is a game designer, writer and huge comic book nerd. View all posts by Callum