Oh mamma Kill Team is one nice looking game. I thought my first post on this blog would be about getting back into the swing of things after a long absence from the hobby but the Warhammer Community team just had to go and drop an info bomb on the upcoming 40K skirmish game, Kill Team!

The short version of all this news is that this is the new stepping stone game to help get eager hobby gamers into 40K. Kill Team is serving a similar function to Warhammer Underworlds: Shadespire acting as an entry point to Age of Sigmar setting. The ruleset is even being crafted by the Shadespire team. Kill Team promises tight skirmish based gameplay with small squads of 40K models battling it out across small-ish terrain packed game boards. It also naturally supports open, narrative and matched play with Games Workshop already committing to offering organised play. So yeah, this is the new big game from GW and they mean business. 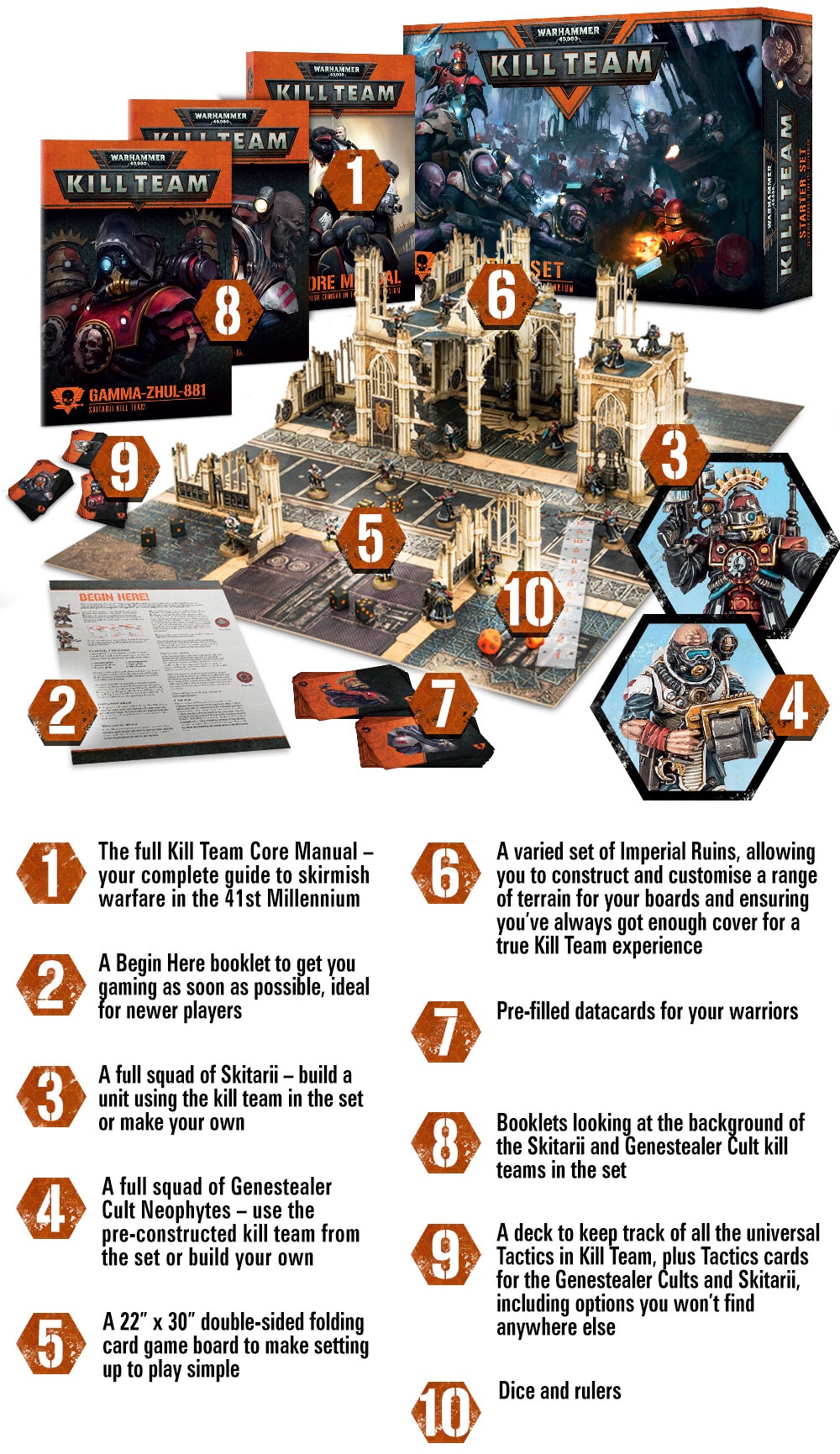 The above starter set is packed full of sweet, sweet looking miniatures. You get a squad of Skitarii and a squad of Genestealer Cult Neophytes, a game board, a load of amazing looking terrain pieces and all the usual dice, data cards, rule books and guides you expect from a Games Workshop starter set.

The choice to include Skitarii and Genestealer Cultists in the box is an interesting one. 40K is the brand built by the might of the Space Marines so not including them here gives a sort of indication that this is a very different game. Space Marines are of course one of the options in the game and there will be many, many expansions featuring them.

Expansions wise out of the gate we have whole new Kill Team specific game board and terrain sets.

A couple of Kill Team squads featuring Orks and Space Wolves. Which come with a bunch of special rules and even more terrain!

Finally Games Workshop announced new terrain kits for 40K that are compatible with Kill Team along with the usual assortment of tape measures, dice and card packs.

It is a lot of cool looking stuff and Kill Team itself seems like it could be a great game. A step up from Shadespire in terms of complexity but not quite as detailed as Age of Sigmar or 40K gameplay.

My history with 40K is bit of a mixed bag, I have always enjoyed the models and the lore. Especially the lore because it is so unique. However the thing that always stopped me from fully committing to it was the fiddly nature of the 40K ruleset. Admittedly I have yet to try 8th edition but Kill Team seems like a great entry point for to give the 40K line of games another go. My plan is to see what the price of the start box is then decide from there, maybe going halfsies with a friend if needed.

Callum is a game designer, writer and huge comic book nerd. View all posts by Callum